All Collections
Workflows in RemNote
Portals - a window to another Rem

Portals - a window to another Rem

Use a Portal to open a window to another Rem on a different page. This allows Rem to exist and be edited in multiple places.

Written by Karthikk Vijay
Updated over a week ago

In RemNote, all of your knowledge goes into a single Knowledge Base. However, you generally only want to think about a small part of your Knowledge Base at a time. Documents let you edit a few Rem at a time without worrying about the others.

You'll want to make a new Document whenever you're learning something new. Let's say you're attending a biology lecture. You might make a document called "Intro Biology Lecture 1", and add some information. 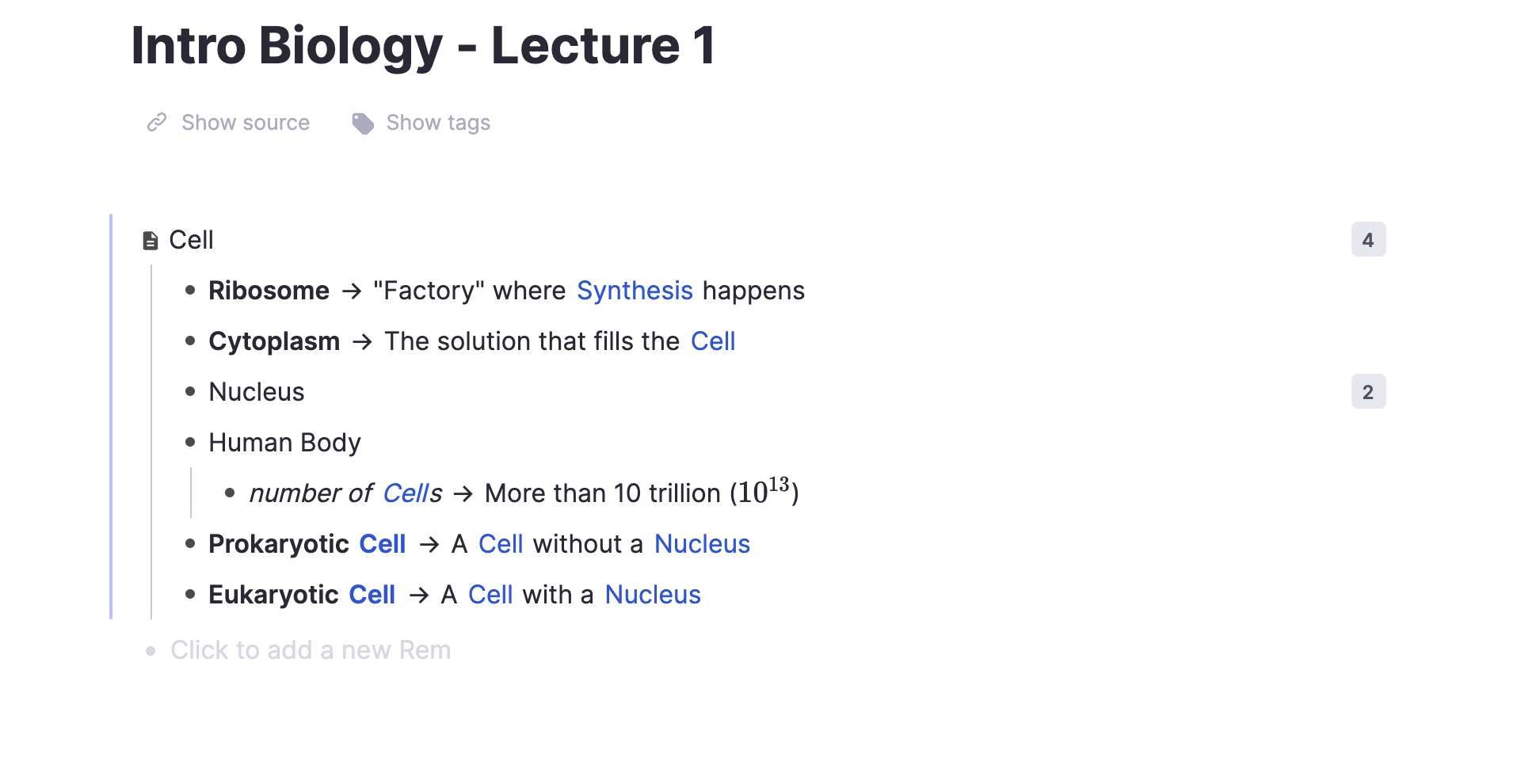 Later, you might attend "Intro Biology Lecture 2" where you keep learning about cells. You create a new Document and start taking notes. You want to make sure that this new information is connected to the rest of your knowledge about cells, so you insert the *existing* Rem for Cell into this new document. Note that this is *exactly* the same Rem as in the first document - if you change it in one document, it will change in the other document. Also, note that all of the Rem's children don't need to be included in either document, allowing you to focus only on the information that's relevant to you.

The blue box in the above pictures is called a Portal. Portals let you embed the same Rem into multiple documents.

Having a single Rem for each idea helps you organize your knowledge. Even if you learn about the same Rem in two different contexts, you can use a Portal to include the Rem in multiple Documents. This allows you to avoid duplicated content in your Knowledge Base.

Here's an example. We place "Cell" into a Portal because it's a general concept that we might want to draw on in multiple contexts. We place the "Date" and "Lecturer" directly in the document (not in a portal) because they're only relevant to "Intro Biology Lecture 2". 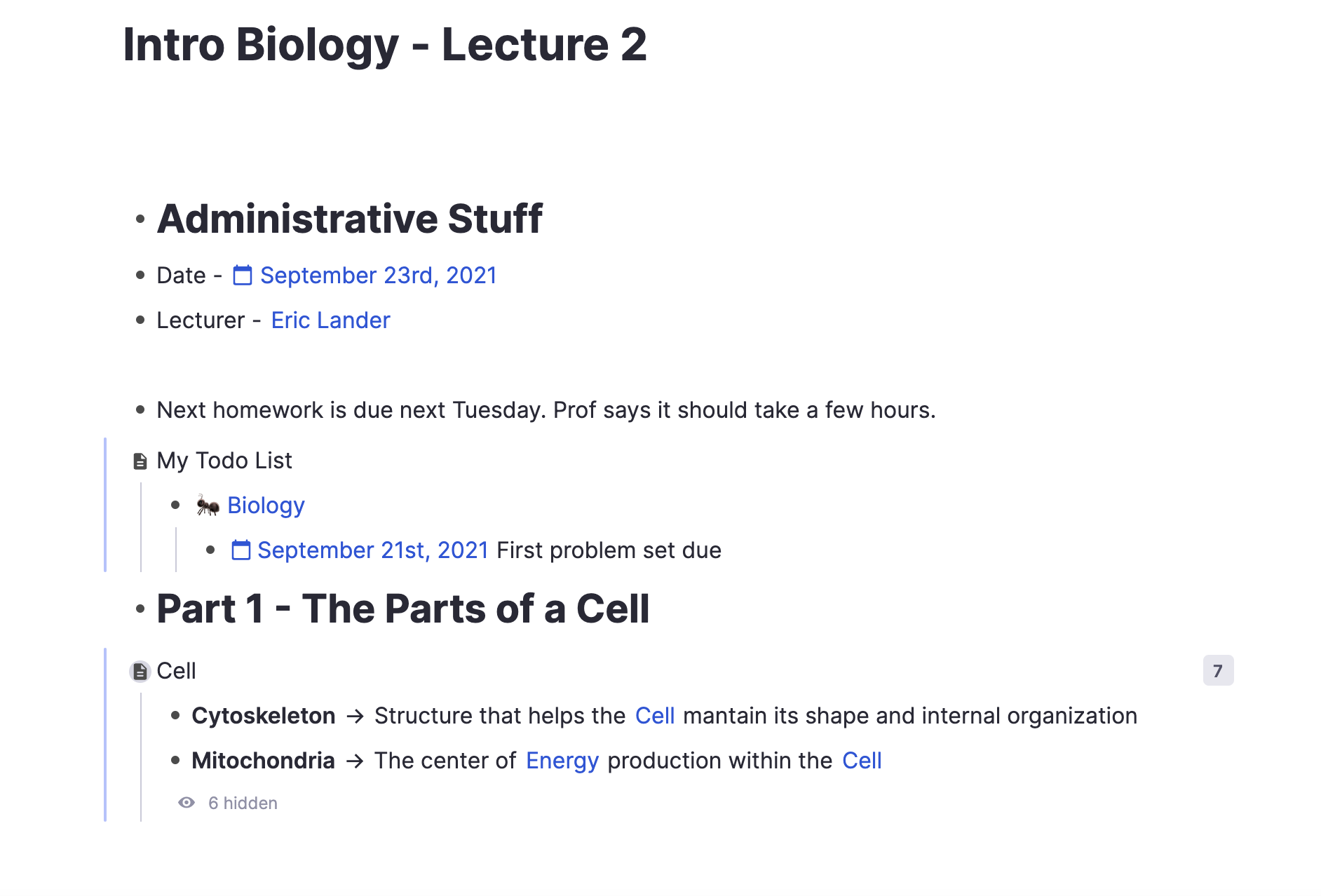 (Also, note how we used a Portal to import another Rem called Todo and make a note about the homework.) Here's the important takeaway - in RemNote, all ideas about the same Concept should be organized together. Documents and portals are designed to make this organization easy.

Here are some definitions:

This search box will insert a Portal containing the Rem you searched for. Then, you can immediately start editing the imported Rem without losing your focus.

Alternatively, you can also search for a Rem first using CTRL +P and then press ALT + ENTER on the highlighted result to add it to the current document through a Portal

If you create a Rem directly into a document without using a portal, the Rem becomes a "child" of the document. Then, the document's name will appear as part of the Rem's Full Name. However, if you place a Rem into a portal, then the Rem's Full Name is unaffected. This trick is what allows us to place the exact same Rem into multiple documents (if you always put it into a portal).

Portals Can Be Used to Generalize Ideas

When first learning an idea, it's convenient to "learn in context" by directly adding it to a document without a portal. Using the above example, when first learning about Cells, you might place them in the document for Biology Lecture without using a Portal. Eventually, Cell might become a general-enough idea in your head that you don't want to think of it only in the context of Biology Lecture 1 anymore. At this point, you can use a portal to detach Cell and turn it into a more general idea.

Did this answer your question?